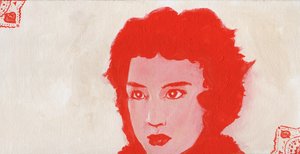 NOTE: Left-click on the image to see a larger version of the artwork.

The Rational Argumentator is pleased to feature another work from Wendy Stolyarov, whose art works exhibit a remarkable originality, skill, and stylistic variety.

Comments by the artist: “I’ve done a little bit of real media painting lately, and I think I’m going to do a series of these 6″ x 12″ canvas panels. They’re really quick — maybe two hours each, but they’re fun to create. Think of them as sketchpaints!”

Wendy D. Stolyarov is an accomplished writer, thinker, artist, and graphic designer, who brings her immense talent and capacity for innovation to The Rational Argumentator and the wider movement for the advancement of Reason, Rights, and Progress. Mrs. Stolyarov uses computer technology masterfully to produce precise, realistic, life-affirming art. She has also contributed multiple essays to TRA and designed many of the magazine’s newer logos, including its banner and the New Renaissance top hat. Mrs. Stolyarov is married to G. Stolyarov II, the Editor-in-Chief of The Rational Argumentator and The Progress of Liberty.

E-mail Mrs. Stolyarov to order prints of her art.